Armenia is a landlocked country in the geopolitical Transcaucasia (South Caucasus) region, that is located in the Southern Caucasus Mountains and their lowlands between the Black Sea and Caspian Sea, and northeast of the Armenian Highlands. Armenia is bordered on the north by Georgia, the east by Azerbaijan; the south by Iran; and the southwest and west by Turkey. Armenia lies between latitudes 38° and 42° N, and meridians 43° and 47° E. 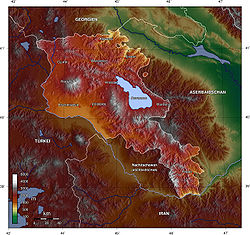 The Republic of Armenia has a territorial area of 29,743 square kilometres (11,484 sq mi). The terrain is mostly mountainous, with fast flowing rivers, and few forests. The climate is highland continental, which means that Armenia is subjected to hot summers and cold winters. The land rises to 4,090 metres (13,419 feet) above sea level at Mount Aragats, and no point is below 390 metres (1,280 ft) above sea level.

Mount Ararat, which was historically part of Armenia, is the highest mountain in the region. Now located in Turkey, but clearly visible in Armenia, it is regarded by the Armenians as a symbol of their land. Because of this, the mountain is present on the Armenian national emblem today.

Armenia has established a Ministry of Nature Protection and introduced taxes for air and water pollution and solid-waste disposal, whose revenues are used for environmental protection activities. Waste management in Armenia is underdeveloped, as no waste sorting or recycling takes place at Armenia’s 60 landfills.

Despite the availability of abundant renewable energy sources in Armenia (especially hydroelectric and wind power), the Armenian Government is working toward building a new nuclear power plant at Metsamor near Yerevan.

The climate in Armenia is markedly continental. Summers are dry and sunny, lasting from June to mid-September. The temperature fluctuates between 22 and 36 °C (72 and 97 °F). However, the low humidity level mitigates the effect of high temperatures. Evening breezes blowing down the mountains provide a welcome refreshing and cooling effect. Springs are short, while autumns are long. Autumns are known for their vibrant and colourful foliage.

Winters are quite cold with plenty of snow, with temperatures ranging between −10 and −5 °C (14 and 23 °F). Winter sports enthusiasts enjoy skiing down the hills of Tsakhkadzor, located thirty minutes outside Yerevan. Lake Sevan, nestled up in the Armenian highlands, is the second largest lake in the world relative to its altitude, at 1,900 metres (6,234 ft) above sea level.

Armenia has a population of 3,238,000 (2008 est.) and is the second most densely populated of the former Soviet republics. There has been a problem of population decline due to elevated levels of emigration after the break-up of the USSR. In the past years emigration levels have declined and there is steady population growth.

The Armenian population around the world.

Armenia has a relatively large external diaspora (8 million by some estimates, greatly exceeding the 3 million population of Armenia itself), with communities existing across the globe. The largest Armenian communities outside of Armenia can be found in Russia, France, Iran, the United States, Georgia, Syria, Lebanon, Argentina, Australia, Canada, Greece, Cyprus, Israel, Poland, Ukraine and Brazil. 40,000 to 70,000 Armenians still live in Turkey (mostly in and around Istanbul).

About 1,000 Armenians reside in the Armenian Quarter in the Old City of Jerusalem, a remnant of a once-larger community. Italy is home to the San Lazzaro degli Armeni, an island located in the Venetian Lagoon, which is completely occupied by a monastery run by the Mechitarists, an Armenian Catholic congregation. Approximately 139,000 Armenians live in the de facto country of Nagorno-Karabakh where they form a majority.[126]

Ethnic Armenians make up 98.1% of the population. Yazidis make up 1.2%, and Russians 0.4%. Other minorities include Assyrians, Ukrainians, Greeks (usually called Caucasus Greeks), Kurds, Georgians, Belorussians, and Jews. There are also smaller communities of Vlachs, Mordvins, Ossetians, Udis, and Tats. Minorities of Poles and Caucasus Germans also exist though they are heavily Russified. As of 2016, there are an estimated 35,000 Yazidis in Armenia.

During the Soviet era, Azerbaijanis were historically the second largest population in the country (forming about 2.5% in 1989). However, due to the conflict over Nagorno-Karabakh, virtually all of them emigrated from Armenia to Azerbaijan. Conversely, Armenia received a large influx of Armenian refugees from Azerbaijan, thus giving Armenia a more homogeneous character.

Armenian is the only official language. Due to its Soviet past, Russian is still widely used in Armenia and could be considered as a de facto second language. According to a 2013 survey, 95% of Armenians said they had some knowledge of Russian (24% advanced, 59% intermediate) compared to 40% who said they knew some English (4% advanced, 16% intermediate and 20% beginner). However, more adults (50%) think that English should be taught in public secondary schools than those who prefer Russian (44%)